Wood-art has been an integral part of Indian history. Sutradhar community, according to legend, are the carpenters (also known as ‘badhaee’) descended from Maya, the son of Vishwakarma (the divine engineer). To date, Vishwakarma day is celebrated in India; and as customary the craftsmen worship their tools.

In past semi-centennial, government’s initiative against deforestation, increase in the cost of wood and labor-intenseness of the craft, carving a path for plywood as a cheaper alternative. But is plywood doomed to be replaced by alternative products?

The design explored conventional limitations of the material sold by the client, veneers and plywood, and its protagonist role in a conversation that has existed in the ancient past as well.

‘Timber Rhyme’ occupies the first story of a retail shop in a market complex, Chandigarh. The challenge was to invite a walk through the existing 71′ by 18′ linear block, as one enters from the rear end.

Due to the shift in times and new engineered materials, the dialogue between a carpenter and a product has perished. The key idea is a by-product of this concern, an elemental ribbon that can be the subject of a conversation while being a facilitator of the same, a conversion.

In design, a single-window that frames outside triggering an innate attraction to prospect and, a sitting space that plays on one’s inclination to take refuge. Both placed opposite to ingress initiates a desire to walk. Represented through the ribbon that pours itself into space, ‘variety in a unified continuum’ nourishes our concepts.

The site was converted into a spatial matrix, as the ribbon gets developed, by selecting a series of spatial coordinates joined together to formulate doubly curved solids. This facilitates the segmentation of the space, where the eye meets varying focal points each at a different elevation than previously. The observer’s speed is dictated by his surroundings as the form makes its presence felt, carving a new perspective with each viewpoint.

The ribbon is envisioned to blur the boundaries between the static, the movable and the art in-and-on these components of the built space. The role of static elements like partition screens is obfuscated with that of movable furniture. Propounding as a functional art space, a series of ‘wooden ribbons’ twist and turn to form the display shelves, sitting spaces, meeting table and other design elements each flowing into the other. This transcends the interior into an Art-landscape.

These ‘elastic geometries’ were realized to be almost self-supporting, threaded from the ceiling using black metal bars. For additional support, translucent acrylic supports were given where the heavy load would be subjected to the ribbon.

The ribbon is manifested as a framework of plywood ribs that were digitally fabricated with the help of a definition developed in Grasshopper. To interpolate the doubly curved geometries, these were subdivided into a network of plywood ribs in x and y directions, interlocking at 6 inches interval. Together these formed a waffle structure that served as the main framework giving the final shape. To form the structure, CNC milling was used to cut the individual components from a 19mm thick plywood ribs. 3mm thick Flexi-ply and 1.5 mm thick paper veneer was used, each cut and handled by the carpenter. For the ease of assembly, each rib was given a unique Alpha-numeric connotation which was etched on ply through CNC milling. They were then jig-sawed in-situ, by the carpenters, in a unidirectional arrangement to correctly align to the next segment. The resultant was a thin, workable skin of plywood 61 linear feet, ranging in width from 9 inches to 8 feet.

The end detail lies in the finishing of the ribs where carpentry skill meets technology. Each Flexi-ply joint was filled with wood filler and sanded as required. It is through this last stage of processing that the carpenter takes ownership of technology and uses his experience and ‘telltale knowledge’ for a finished structure. Lastly, he pastes, strips of paper veneer perpendicular to the curvature of the structure blurring different components of the whole. The light oak veneer was chosen for its soft grain, drawing attention to other materials while acting as background noise to put materials against each other. This evolved the other half of the name as ‘rhyme’, an uncertain noise and whispering in ears, subconsciously picked up by the soul, but almost always unaware by the mind.

This amalgamation of technology for cost, time and ease of making with an advantage of old craft, is a win-win situation for all stakeholders of the project. The retail shop becomes a setting befitting for a dialogue between the carpenter, the end-user and the retailer deepening social engagement. As plywood-carpentry meets its entropic spiral, ‘Timber rhyme’ hopes to create an opportunity to re-imagine craft of the traditional curves, as an inexhaustible source of inspiration for the next generation of torchbearers of intricate carvings. 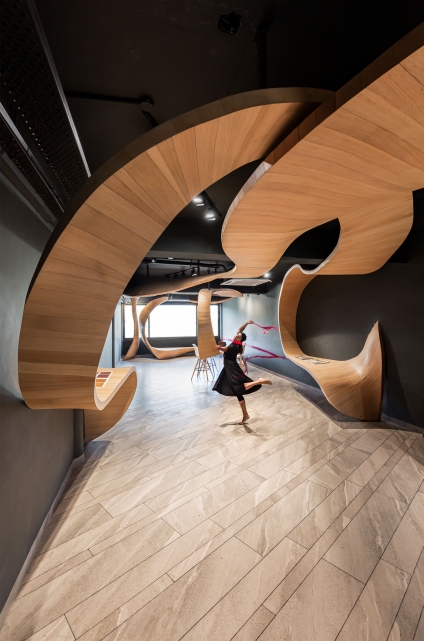 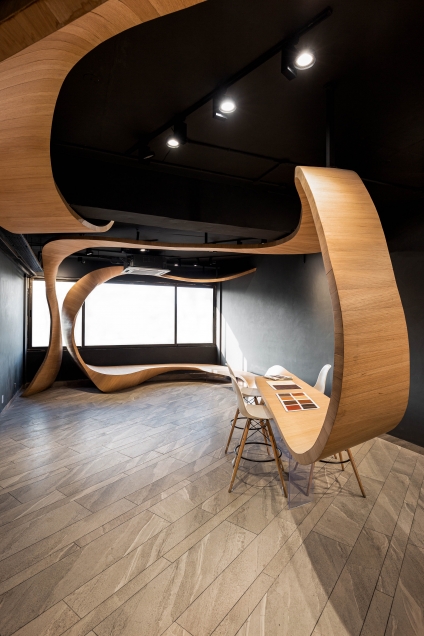 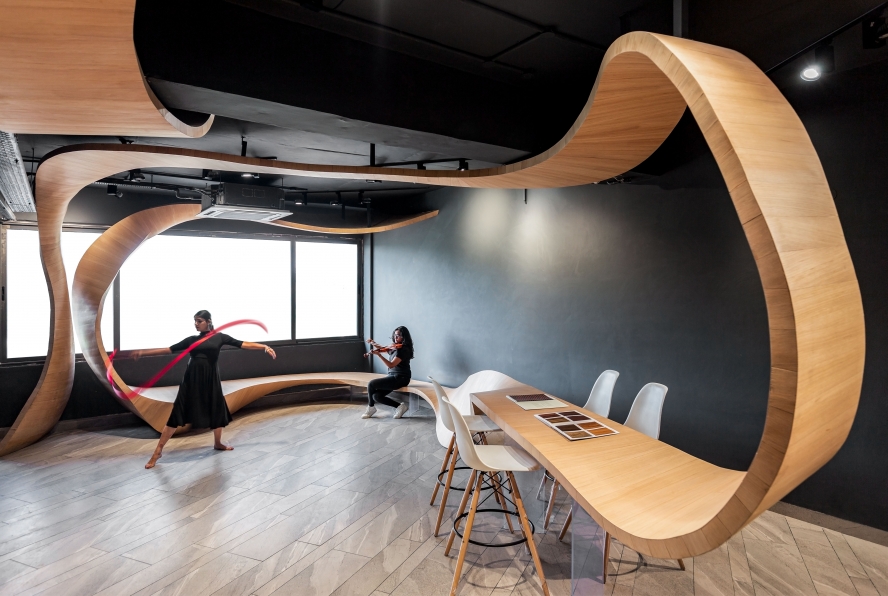 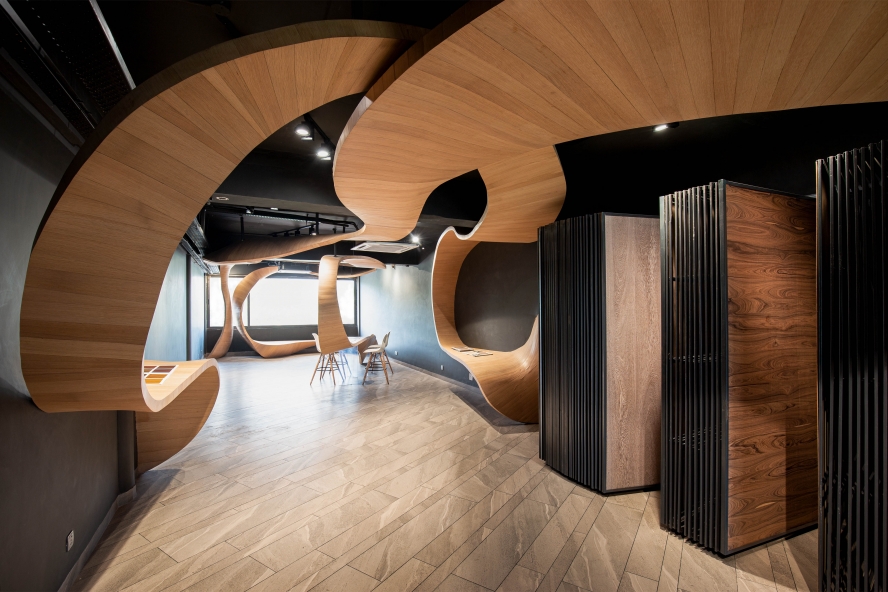 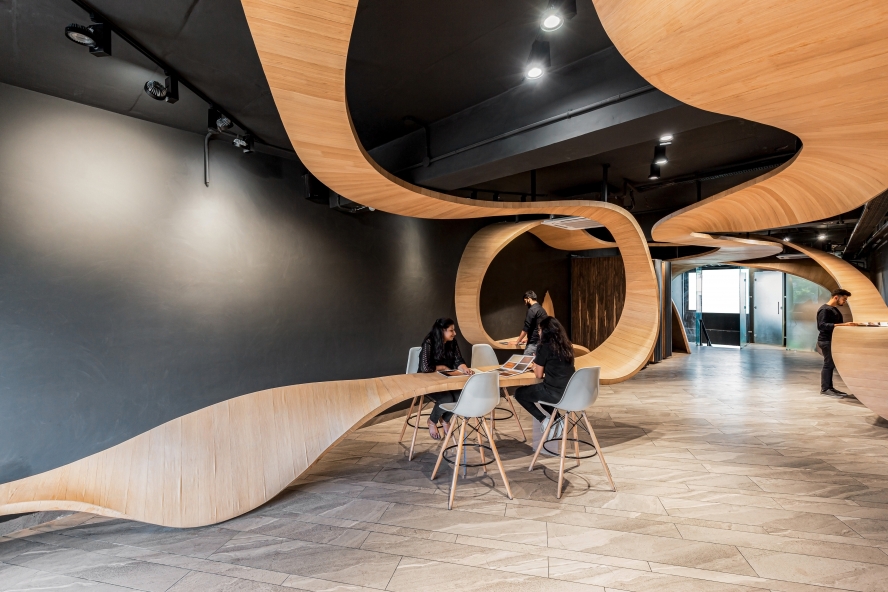