Upon approaching the South entrance of the house through a short traverse along the lawn, one is greeted by a generous verandah which is pushed into the line of the building, decked up with flowery planter pots that the owner’s wife insisted on keeping, along with a swing set to enjoy evening teas on, breathing in the green of nature.

The verandah leads to a voluminous living space that at first glimpse would make one wonder whether they are really indoors or not, due to the fact that it sits cradled in the lap of two courtyards that let a gush of light in. The living area is cocooned deep into the house away from the lawn to be protected by the harsh sun from the south-west.

The interior composition of the spaces was envisioned as an attempt at bringing about the convergence of habitat and nature. The living space being the center of the house where most energies reside, receives serenity of nature from the lawn on the south and vitality from sunlight that enters through courtyards on east and west. The view of the green outside is sincerely captured and put conspicuously right beside the most frequented space so that it becomes the subconscious background to the life playing inside.

The master and guest bedrooms have been placed along the South wall overlooking the lawn, making the user feel a constant connection with nature. The mother’s bedroom faces the South-East wall overlooking the park across the road. The courtyard on the east of living is a green court lined with glass on three sides that visually and physically connects the bedrooms to the living space and instills a sense of fluidity. The courtyard sits deep into the living room to ensure mutual shading of the spaces adjoining it.

The courtyard on the west of living, houses dining which further leads up to kitchen, spice kitchen and a service area towards the rear. The sequencing of spaces was derived from the functional patterns of the household activities. Secondary access point has been given to the service zone in order to avoid disruption from house help. 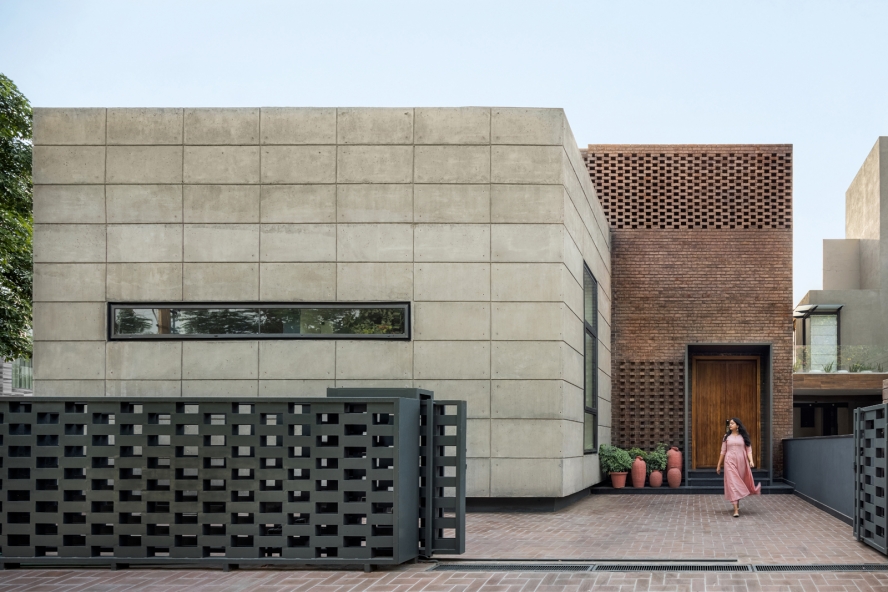 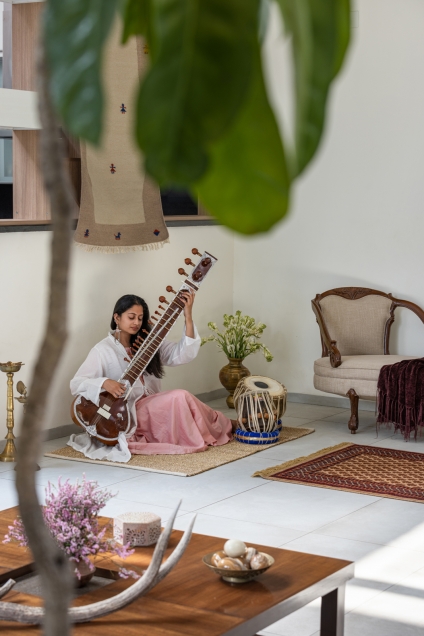 The cognitive confluence of courtyards enhances the space by bringing in light, a hope for all life. They rise up to attain double story height, masoned with pigmented wire cut bricks, the color and texture of which give an inherent feel of being ensconced by the cozy soil. About a quarter of the total height of the courtyard’s wall is lined up with brick jaali. The depth of the courtyard ensures that only reflected light enters during noon and jaali lets in diffused light during dawn and twilight hours and so, the rhythm of light is made to dance along the tune of the brick’s music throughout the day to achieve a pacified state of thermal well being.

The palette of the interior scheme was kept muted with specs of colors and textures of stone, walnut wood and bricks, that are vicariously derived from earth, to imbue in the air, a feeling of being amidst the certainty and security of nature.

The spaces have been composed in a manner that retains the traditional Indian vibes of the furnishings that the client prepossessed. The warm white of the walls becomes a perfect backdrop to block printed tapestry and hand drawn sketches made by the owner’s wife. The light walls compliment the gray of flooring and red of bricks, to which a perfectly balanced touch of green is infused by the plants that adorn the courtyard. The richness of walnut wood of doors and gold of brass pots add earthy elegance to the whole setup and transport you to faraway villages of India. 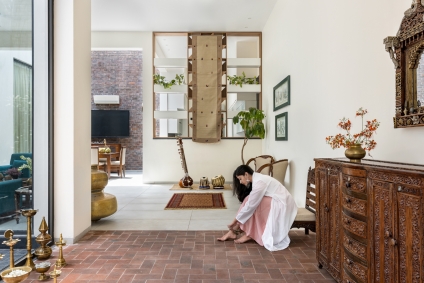 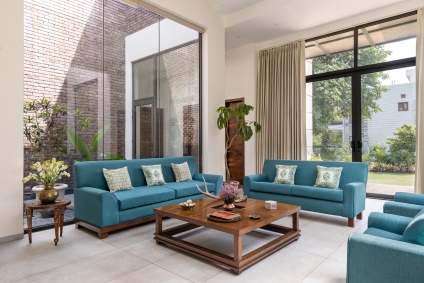 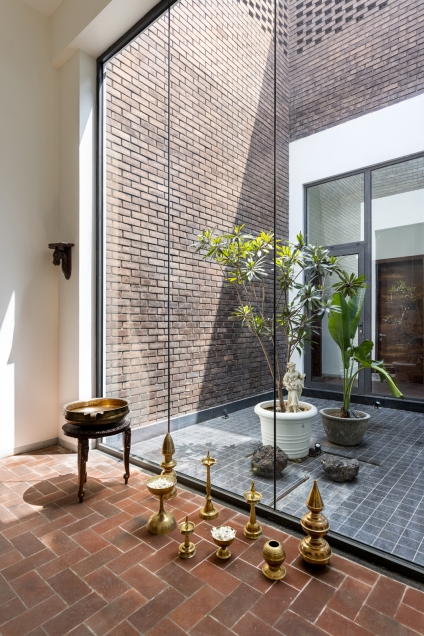 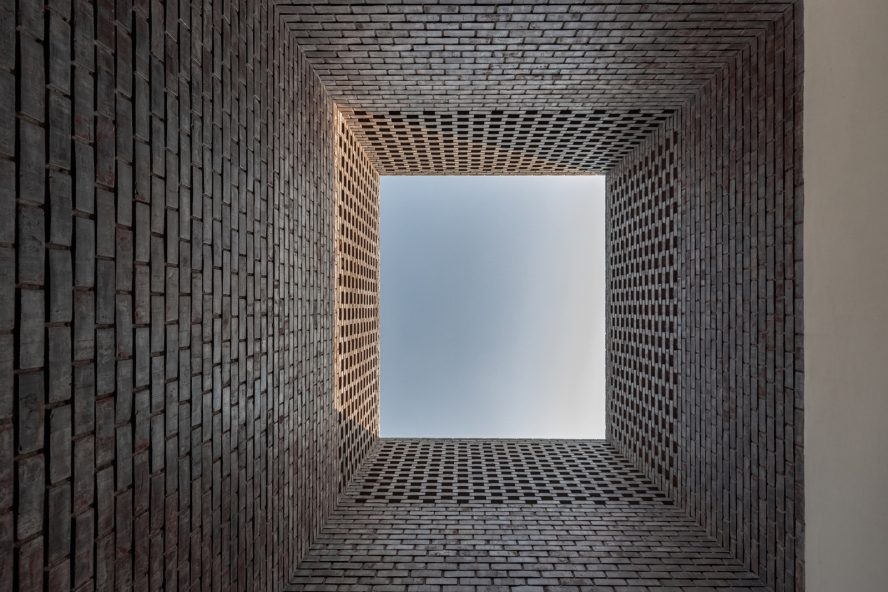 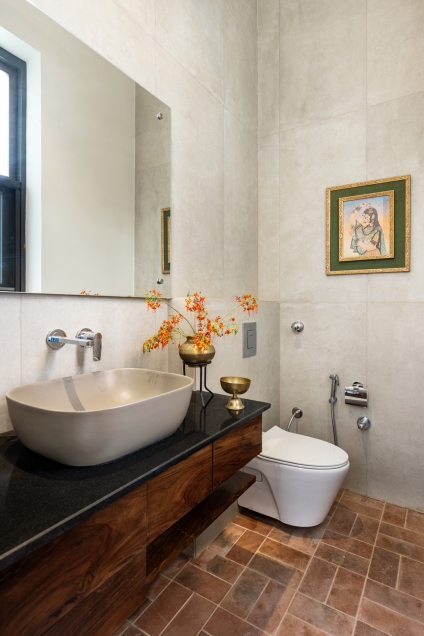 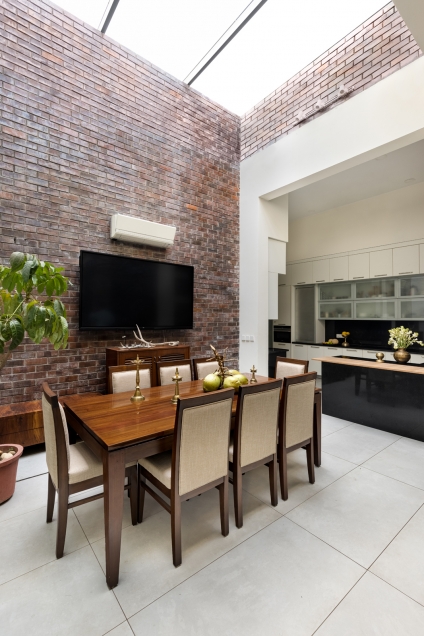