Swarn is a jewellery retail store in Chandigarh which puts forth an all encompassing exclusivity much like the idea of- The Gold Standard. The brief steered the design to embrace the idea of exceptionality and uniqueness to propound the brand’s identity- the jewelry that defines you.

The idea was to create a pronounced space for a retail venue highlighting a varied collection of jewelry and accessories. To emphasize the idea of -“Swarn”, the entrance is riddled with a cluster of stars that represent the whole aura of the store- Differently oriented peculiarities, suited to their own taste. The linearity of the space was used to imitate the intricacies and the significance that the ornamentation holds in the culture. The black and gold tones elaborate a royal aesthetic which magnifies the individualism. On the ground floor, this culture was interpreted with different design elements. The walls were provided with niches which were finished with quilting for singular designer pieces, promoting a higher albeit a kingly standard of inheritance. Enclosed in a gold frame, the displays attract an attention to the details. In the background the display is surrounded by black vinyl sheet with punctures ranging from 2-4 mm with backlit acrylic sheet. The gradually fading punctures create an alluring scenario of a rain of gold which becomes a sight to behold and endear. A reflective stretch ceiling prolongs the verticality of the store.

A similar aesthetic is extended to the basement in a more intricate form. The compositions of the gold frames become complimentary to the environment. Here, the jewelry pieces are put up on pedestals and encased in glass frames which create a sense of elite. Again, the linearity of the space is complimented by the verticality of the design language. Rows of frames and free standing displays put forward the magnificent details of the collection. At the back a series of golden metallic frames suspended from the ceiling form a rhythmic composition which brings attention to the exquisite jewelry.

The dark shades of the ceiling and black reflective mirrors become a subliminal presence which accentuates the importance of the gold.  In essence, Swarn shares the individuality of each person, unique and royal unto themselves. Each piece, display crafted to some peculiar taste, the design becomes a cultivation of a personalized notion of being. 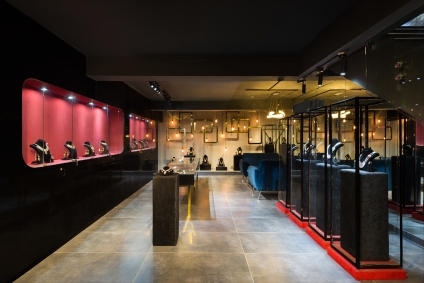 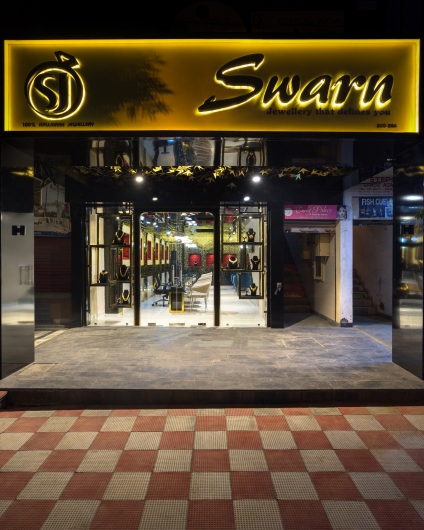 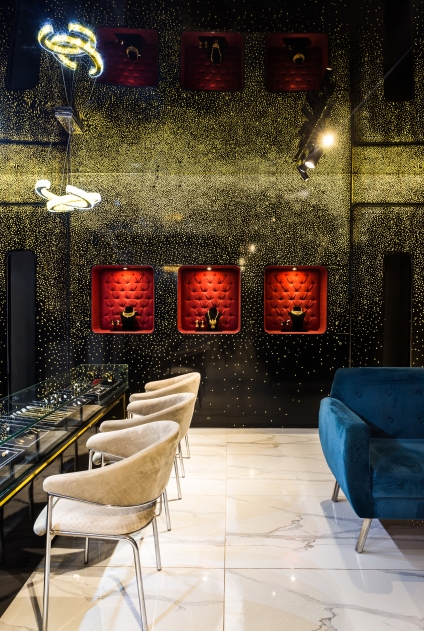